Alexis Bledel (Rory Gilmore) features in Jenny’s Wedding, a movie to be released later this month. 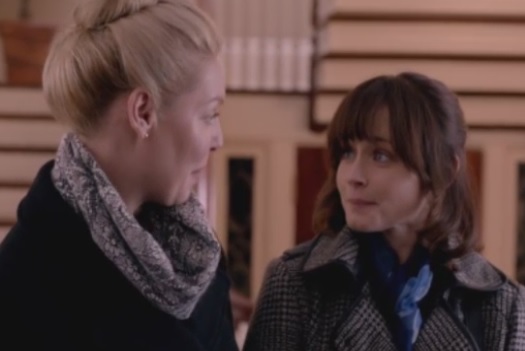 You may remember this was partly funded through crowdfunding site IndieGogo early last year. They raised $96,691 of their $150,000 target in just two months.

The film centres on Katherine Heigl’s (Gray’s Anatomy) character Jenny who decides to tie the knot with her partner, Kitty (Alexis). However, Jenny’s conservative parents don’t know she’s gay, yet.

The trailer promises a topical story based on a real-life story with strong supporting performances from Tom Wilkinson as Jenny’s father, Grace Gummer (The Newsroom and Meryl Streep’s daughter) as her (probable) sister and Linda Edmond as mom. The real Jenny and her family are extras in the wedding scene and in an interview with Curve last year, Alexis said:

That’s the most satisfying part of doing this job, to know that somebody gets to see something reflected that they didn’t think anybody else was going through — to be able to identify with a story, especially one that’s told from a personal point of view, the way Mary Agnes wrote this one.

Alexis looks suitably adorable, check her out in the trailer here:

Appropriately released in the very month that the US Supreme Court ruled in favour of marriage equality across the nation, the movie comes to theatres/theaters on July 31st and in case that’s too inconvenient, fear not! It arrives on Video On Demand the day after.

Do you buy Katherine and Alexis as a couple? Or are you having the same problem as me – it’s kinda impossible not to see them as Izzy and Rory? Which actually isn’t so much a problem as a pleasantly distracting daydream.

Just how much would you donate towards a crowdfunded Gilmore Girls movie? Bearing in mind the perks for Jenny’s Wedding included coffee mugs, signed screenplays, production stills, your name in the credits, official t-shirts and dinner with the director and producers?