Well, that happened.  The Gilmore Girls cast reunited, babes and beards and an empty chair – and it was good.  ‘Good not great?’ I hear you ask. Alright already, it was mondo-fabulous. 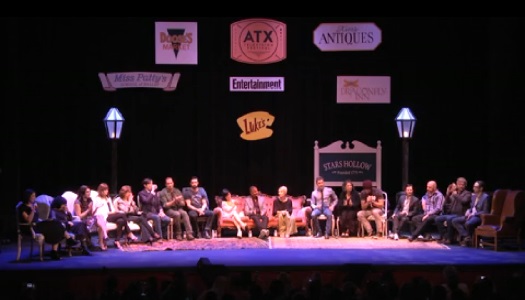 Sadly I wasn’t there in person but so far I’ve caught up with the Entertainment Weekly coverage, namely the live blog and the reunion panel video and am left wondering – where’s the rest of it?

The blog timeline shows that the talking started at 7.40pm and finished at 9.40pm yet the streaming video lasts a little less than 50 minutes. Why have EW cut one hour and ten minutes?  Perhaps time really does fly when you’re having fun. Well, do we really need it?

Of course I’d still gobble up another hour of these familiar faces sitting together in real life, shooting the breeze and talking about my favourite subject. But bear in mind, EW sponsored the event and from the ATX founders pre-reunion speech, we are told the whole shebang might not have happened at all without EW:

I suspect EW is holding the whole thing ransom for when TheWB releases the 10th Anniversary Blu-Ray Widescreen Boxed Set and that’s fair enough. They paid for it and they didn’t *need* to show us anything. If they’ve taken the time to edit it, there’s got to be a reason behind it. And it’s not because of swearing!

I just thought – the obvious omission from the video stream is the tribute to Ed Herrmann – if this included scenes from the show, there would be copyright issues with TheWB. Did you see that? That’s my law degree brain working there.

Besides, the live blog doesn’t suggest we miss that much. Perhaps those who were there could enlighten us? If you were there, what are we missing?

Regardless, what we do have is extremely pleasurable.  Seeing the cast again in all their beautiful, beardy glory. Whenever they mention Ed Hermann’s passing, Kelly Bishop’s reaction makes my eye twitch. Rory’s three boyfriends wisecracking and demonstrating clear respect for each other is pure class. Amy Sherman-Palladino (sans hat) admits watching season 7 purely through having ABC Family on in the background and realising she doesn’t recognize Alexis’ hairstyle or that the walk ‘n talks were too short. Liza Weil and Danny Strong (Paris and Doyle) are as connected as ever. And Lauren Graham handles the ‘last four words‘ issue with eloquence:

Lauren: I don’t wanna know unless either I am saying them or I am listening to someone say them – who’s in the show the way it was intended… otherwise I would feel sad to know what I wasn’t a part of. 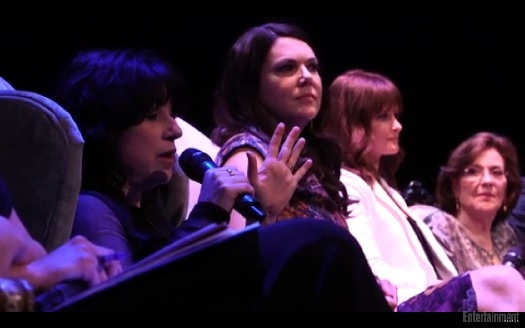 I’d be lying if I didn’t say I was disappointed that there was no Big Announcement about a sequel or continuance. But it is affirming hearing and feeling the affection both within the cast and directed at them from the audience. Everybody there on the stage and in the crowd loves Gilmore Girls and this can only be a good thing.

I’ll be posting more tomorrow about my standout moments from the non-live ‘live stream’ where three of my questions were asked and answered!

Until then, let’s watch those 48 minutes and 40 seconds again. Take a drink every time someone says ‘audition’, ‘fembot’ or the crowd goes ‘WHOO!’

What have you seen and liked? Or disliked?

How much do you really, really need that missing hour?