What’s the deal with guys liking Gilmore Girls? The show primarily centers on a mother and daughter who are best friends, features strong coming-of-age elements together with romantic entanglements and dealing with family issues. 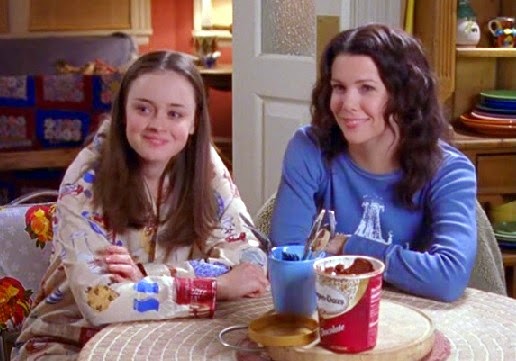 From these, you wouldn’t think it would initially attract much of a traditional male following but even now, 8 years after the show finished, there are not one, but  two ongoing podcasts where guys enthuse, re-watch and share their feelings about the show. Gilmore Guys – who scored the Scott Patterson interview earlier this week – and the previously featured Gilmore Girls Boys. And there’s GilmoreNews.com of course, written largely by me who is, last time I checked, a dude.

Yep, still a dude.  And we’re not the only ones.

This Reddit stream of consciousness is a Gilmore Girls-specific response to the question : ‘Males of Reddit, what’s your most girly secret?’

Thorspint: As a man, with a beard, a love of engines and beer. I love Gilmore Girls.

greebytime: I used to tell my then girlfriend, now wife, that I liked it because of the ripping dialogue but really…at least somewhat, it was because the two lead actresses are white hot.

So guys – and I know we have a decent number of male readers – what is it that makes you a Gilmore-lovin’ Guy? How is it different from other shows? Are you a closeted Gilmore fan? Do you feel like there’s a stigma about liking the show or do you just not care? If it’s any help, I believe sharing your geeky loves (and hates) with the world is the quickest way to weed out the riff-raff and find your kindred spirits.

For me, I love Gilmore Girls because it makes no apologies. It’s funny AND smart and I like a bit of both in all my art – which includes movies, TV shows, flickbooks or whatever. I can’t remember if I’ve said this before but Gilmore Girls fits my standard of art becoming sublime: Where nothing added or taken away would make it any better.

I’m the same with people, come to think of it. I like a bit of smart in my funny, a bit of funny in my smart.

Penny for your thoughts?  And girls – what would you think of a guy who liked Gilmore Girls?

4 thoughts on “The (Real-Life) Guys Who Love Gilmore Girls”