GilmoreNews caught up with them to find out more about their book and their story – which will knock your socks off. They talk about their very Lorelai and Rory-esque backpacking adventures, about being Team Dean and/or Team Jess and tips on how to get picked up by a major publisher.

As if that wasn’t enough, we also have free copies of their book for two lucky winners, so roll up and don’t say we never spoil you. 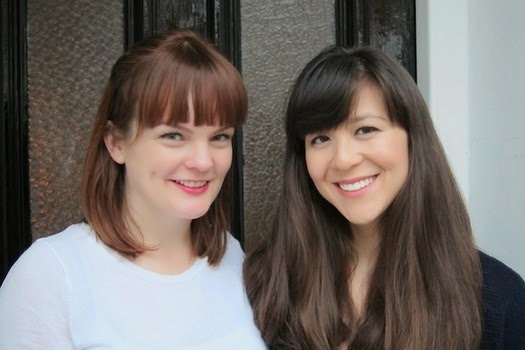 Let’s begin with your book, released earlier this year by Penguin (Gotham imprint). What’s it about and why is getting fabulous reviews on Amazon and Goodreads?

Jess: The book is the true story of our post-college adventures, told through our weekly letters to each other as we lived around the world (from New York to Beijing and then later, when Rachel is in Paris and I’m in Melbourne). Rachel and I met our freshman year at Brown University (sidenote: Emily Gilmore would not approve as it’s not prestigious enough for her!), and we wanted to make sure that we didn’t fall out of touch the way that so many friends do after college.
Rachel: Our hope, when putting the book together, was to reach friends like us – people who had been separated by circumstances, going through the things that people of all age go through (but especially twenty-somethings): feeling lonely, lost, uncertain and also all the funny strange things that happen to you at that age. And it’s been wonderful to see how people have responded to that, and how many people are in parallel situations to ours.

How much of the story is autobiographical?
Jess: It’s all true. Everything in the book happened to us…unless my parents are reading this. Then it was all made up.
Rachel: These are the actual letters that we wrote to each other, although we did cut out all the boring parts. No one wants to read about the sad months where you may have sat around eating saltine crackers and just, well, watching Gilmore Girl episodes.

What’s your favourite bit? Or read us a paragraph…
Jess: Random searches through our emails brought up the most bizarre stories that we had forgotten about – like the time I roofied myself or funny language misunderstandings Rachel encountered in Paris. We were mostly struck by how those emails took us right back to those moments – feeling lost in a new city, or giddy, or devastated by a break-up. They’re very raw and real – those first couple of years out of college are usually the most crazy and chaotic, and we thought, “This is kind of a useful, or at least an entertaining story that maybe other women could relate to.”
Rachel: When we were 22, we knew nothing. It’s crazy to revisit the past when we reread the book. I’d have to say that watching Jess’s romance unfold (and no spoilers, so only those who have read the book know exactly who I’m talking about!) is really an amazing part of the book – and one of my favorite real-life stories.

Alright already I’m sold! Now how on earth did you end up talking to Amy Sherman-Palladino?
Jess: We had a film agent interested in taking us on, and when we signed with her, she wanted to know who our dream producer would be. We didn’t even have to think.
Rachel: “AmyShermanPalladino!” said at the same time.
Jess: So our agent set up the phone call, and it just felt surreal. We couldn’t believe we were hearing her voice!
Rachel: She was very charming. Talked a mile a minute, but so did we. We probably spoke for about half an hour total, but collectively said more than any three people within that half an hour anywhere (except, of course, on Gilmore Girls!)
Jess: That show brought us together as friends, so it was surreal to be talking to the creator Amy on the phone, like a real-life Lorelai who swears a little more. I mean, at college, Rachel and I used to sneak into the apartment upstairs (where five guys lived) and watch Gilmore Girls in their living room while they were out because our TV was broken. They still have no idea.
Rachel: Amy said that she was drawn to the idea of choosing your own “family” through your friends, and through positive portrayal of female friendship that didn’t involve us pulling each others’ hair out over some guy or talking about how we had fat asses.

Did it sound like she was wearing a hat?
Jess: Definitely.
Rachel: Either a top hat or a bowler, but they’re hard to distinguish by sound.

What was it about Gilmore Girls and Amy that prompted you to suggest her as the one you wanted?
Jess: We’d both grown up with the show – it ended just as we graduated college! Having Amy working to bring our book, which takes from graduation throughout our twenties, to the screen, would be so perfect.
Rachel: Also, with Gilmore Girls, the balance of drama and comedy is really perfect. It really combines both genres, in the way that our actual lives seem to. And she so perfectly handles the production and writing and direction – sorry, just spent two hours reading about film! Anyway, she’s a great artist.

Who was your favourite of Rory’s boyfriends? No pressure.
Jess: Jess. In fact, the other day we were sitting in our local London Starbucks writing and I looked up and his doppelganger was sitting across from us: black hair, leather jacket, jeans, same pout. It was so great. We posted him on Instagram, of course (go look – we’re graduatesinwonderland on Instagram) where we post photos of London, travels and GG lookalikes.
Rachel: We are in total disagreement on this one. 100% Logan. I’ve got a huge weakness for aristocratic playboys.

And favourite Gilmore Girls lines?
Jess: I’ll always love the Luke and Lorelai banter, so their love story was so satisfying to watch unfold. “Will you just stand still?” is the greatest sentence ever uttered. I also love it when Lorelai and Rory devil-egg Jess’ car. His reaction always makes me laugh so much.
Rachel: “You jump, I jump, Jack.” Sigh. Still thinking about Logan.

We have a few budding writers in our readership. How did you get published with Penguin (Gotham) and what advice could you give those seeking publication?
Jess: Having a literary agent really opens doors. We didn’t have any contacts but read online about how to write a book proposal – it’s pretty straightforward – just Google it. Then we put together the first 50 pages as part of the proposal and sent it off to a few literary agents that seemed to publish books that seemed similar to ours. Eventually, we heard back from our current agent.
My advice is make sure that you have someone representing you who really loves your project and who’s willing to go to bat for you. They have a lot of control and if they are too busy for you, nothing will happen with your book.
Our agent told us she had been looking for a book like ours and she had great contacts and we ultimately went with the editor whose vision for the book most closely aligned with ours.
Rachel: As you’re pitching to agents, make sure that your proposal is extremely tight, and (this is especially true if you don’t have six billion Twitter followers or a big “platform” – which we didn’t) that the sample material is as compelling as possible.
Jess: That said, think carefully about your title! We think our title actually turned out to be too limiting – it is not just for graduates or recent graduates. A college degree or being fresh out of college is not required! It’s just a tale of travel, love mishaps and friendship.

Brilliant stuff. So, what’s next for you guys?
Jess: I’ve been freelancing writing here, as well as writing my satirical baking column and working on a collection of essays.
Rachel: I’ve been finishing a novel, which should be ready to pitch soon, and we both still live in London.
Jess: To date, though, the best thing that’s ever happened to us is when Amy Sherman-Palladino once called them to say she thought their book was “delightful.” If only we’d been able to find some funding for the movie…but maybe someday. If anyone’s interested, let us know?!
But honestly, we just want friends to get some comfort, courage and amusement from our book.

Didn’t I tell you it was a good story?  Thanks so much to Rachel and Jess for sharing their stories – and their books!

We have two copies of Graduates in Wonderland to give away! If you’d like to be up for a chance of winning, Re-Tweet our Tweet of this story mentioning @GradsinWndrland or leave a comment below.  You don’t have to use your real name but we will need a real e-mail address so we can get in touch. If your mind goes completely blank, you could always use one of the names or aliases to which Lorelai receives mail order catalogues.

Apologies rest-of-the-world, but this competition is only open to those with a postal address in the USA or UK.

We’ll draw the winning names out of a bowler or possibly top hat, next week.

Graduates in Wonderland is out now. (http://graduatesinwonderland.com/the-book)

10 thoughts on “Our Jess and Rachel talk to Amy Sherman-Palladino! PLUS Competition Time – RT to WIN!!”