Hasn’t it been nice to see Lauren Graham on our screens recently?

Coming up later this month (on Thursday May 14) she will appear on the season finale of CBS’ The Odd Couple, Matthew Perry’s comedy about a pair of hilariously mismatched room-mates. In the episode that aired, the Inland Revenue Service decides to audit Oscar (Perry) and his ex-wife Gaby (Graham). Felix (Thomas Lennon) offers to mediate between the exes and – uh oh – realizes that he might be the reason Oscar was audited in the first place! 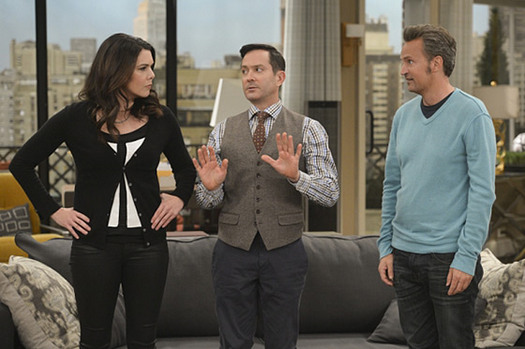 Fact-fans, Lauren and Matthew dated briefly back in 2002 and have been good pals ever since, including on-screen appearances as friends in Go On and Lauren appearing as herself in Aaron Sorkin’s one-season wonder, Studio 60 On The Sunset Strip.

She also appeared in Repeat After Me, the Ellen DeGeneres-produced hidden camera show where celebs act on Wendi McLendon-Covey’s secret earpiece instructions. The set up is that Lauren is interviewing a new writer and McLendon-Covey turns it into an awkward dating situation punctuated with a large wheel of cheese.  At times it feels like watching a Milgram experiment but it’s worth it to see the naturally outrageous Lauren trying to stop herself laughing.  I offer it up here, courtesy of Ellen, as I’m recovering from a dreadful cough / cold / man-flu and really, really need a nap.

Our article [and edits] come to you this week with kudos to our resident tipster, Regis.

Pics courtesy of those caring Corporates, CBS and ABC