It’s been 7 years since we last saw Lorelai and Rory, swigging coffee and referencing pop culture faster than Road Runner could meep-meep. 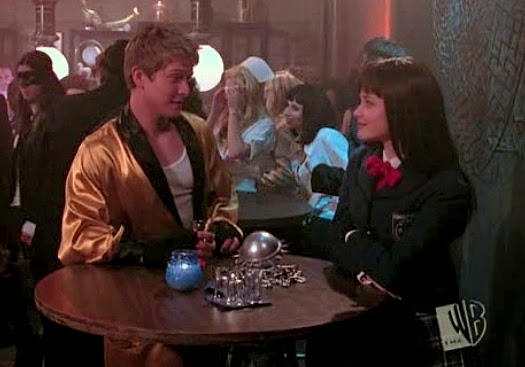 Part of the (many many) magnetic charms of the show were the references that made me feel like they were talking directly into my soul. Some examples…

Lorelai: You don’t care at all, do you?
Michel: To me, you are the teacher in the Charlie Brown cartoon. [Sounded like a muted trumpet – ‘WAH wAH waah’]

Rory: Got it. Hey, how come we don’t have a tiki bar?
Lorelai: Well, we are not two wild and crazy guys. [Steve Martin’s characters on Saturday Night Live]
Rory: You like pina coladas.
Lorelai: And getting lost in the rain. [Rupert Holmes’ Escape – The Pina Colada song]

What were your stand-out pop culture references?

In the Captain America: The Winter Soldier movie, Cap keeps a notepad of modern things that he missed on during his 65 year sleep, to catch up on. The list in the movie differed from country to country so in US theaters, it included ‘I Love Lucy’ and ‘Pisco’ whereas in the UK it included ‘The Beatles’ and ‘World Cup Final (1966)’. Italy’s listed ‘Roberto Benigni’, Mexico had ‘Shakira’ and Korea had ‘Oldboy’. Gizmodo has a compilation of the different lists here.

Today’s loosely related daydreaming has me pondering… if she was on our screens today, what would Lorelai be referencing – and how?

Facebook only started in 2004. We didn’t have Twitter or tablets. Would she have been an uncontrollable Twitter-er? Perhaps they’d have gone totally post-modern, Rory and Lorelai sitting on their sofa remarking on how often Lauren Graham appeared on Ellen. Or the travesty of Bunheads being cancelled.

I can see Mark Wahlberg moving to Stars Hollow, playing Marky Mark in his early 40’s. He’d be flirting with Lorelai:

Marky Mark: Hey, I just met you… and this is crazy, but here’s my number. Call me, maybe?

I think there’d be some sisterly love too for (the lovely) Taylor Swift, but what do you think Stars Hollow would be gabbing about today?

Here’s something to listen to while you think about it…

6 thoughts on “What Would Lorelai Make of Taylor Swift?”