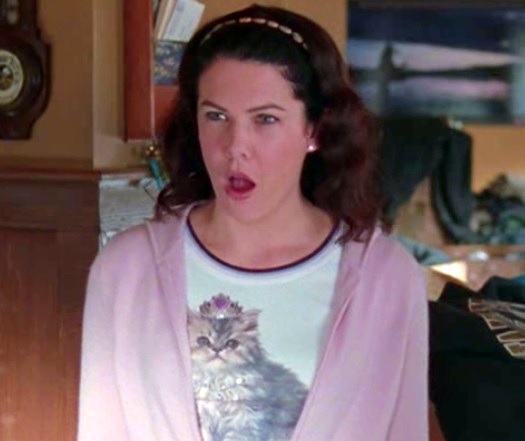 – Rory’s teacher in the pilot episode was played by Jill Brennan, who returned 4 years later as ‘Crazy’ Carrie Duncan, one of Luke’s high school dalliances

– In the original pilot script, Lorelai cooks a celebratory banquet and both the girls enjoyed salad – unlike in ‘real life’, where pizza is a food type and the oven is used to keep shoes

– Stars Hollow was in part based on Washington Depot, CT – a real place that we’ll visit during one of the Stars Hollow Cons, the Gilmore Girls Convention

Rory: Buttercup is a special dog. She’s extremely skittish and tends to react badly towards blonde haired females, brunette males, children of either sex, other animals, red clothing, cabbage or anyone in a uniform.
Lorelai (to Luke):Hey, we just found the doggy version of you.

– Neither Lane nor Mrs Kim were Korean

– Alex Borstein was originally cast to play Sookie but due to Alex’ contractual engagements, was re-cast as Drella (the eternally-miffed harp player) and later on as Miss Celine the Gilmores’ dresser)

– The exterior of the Dragonfly Inn was the house from popular 70s show, The Waltons

– Sean Gunn turned up as both the swan guy and Mick the cable guy before becoming Kirk forever.  Including an alternate universe Kirk as Bash, in Bunheads

– At the school performance of Fiddler On The Roof, Matthew Perry can be seen hiding behind the curtain after Luke fixes Kirk’s cart

I have homework for you this week.  Hunt out some unexpected trivia and post it below.  tv.com has thousands I never knew about.  Or you can totally make it up, just like I completely fabricated every fifth ‘fact’ above.

12 thoughts on “Best Gilmore Trivia Ever”