We’re a little behind the curve on this one but I only found last week that Alloy Entertainment has started development on Sisterhood Everlasting, the final book in Anne Brashares’ Sisterhood of the Travelling Pants series. 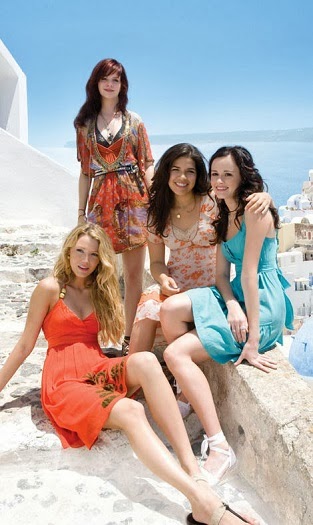 The first movie, starring the oh-so-hot foursome of Alexis Bledel (our Rory Gilmore), Amber Tamblyn (Joan of Arcadia), America Ferrera (Ugly Betty) and Blake Lively (Gossip Girl) was released in 2005, its sequel in 2008. This next one is set ten years later, when the girls have naturally gone their separate ways.

In the book, Carmen (the character played by America Ferrera in the previous movies) is now a successful New York actress and engaged. Bridget (Blake Lively) is living in San Francisco with her long time boyfriend. Lena (Alexis Bledel) is taking solace in her art and teaching in Rhode Island, but daydreams about what might have been with Kostos. Tibby (Amber Tamblyn) sends them all plane tickets to reunite with probably life-changing consequences.

Casting is not yet confirmed but Alloy’s president Len Morgenstein said:

The original film brought together an incredible group of talent who we hope to unite for fans once again.

As we know, these girls have been BFFs since the first movie and if schedules allow, I’m sure they’d love to get paid to hang out for a few weeks. The real question is whether that pair of jeans has enough fairy dust to still fit anyone ten years later. I mean, really.

Any big Travelling Pants fans out there? Wouldn’t it be cool to see these gals together on the big screen again, as grown-ups?  Did you think the original cast was well-cast?  Any cynical nonplussers want to weigh in on how the movies didn’t live up to the books – or vice-versa?

10 thoughts on “In Development! Sisterhood of the Travelling Pants 3”