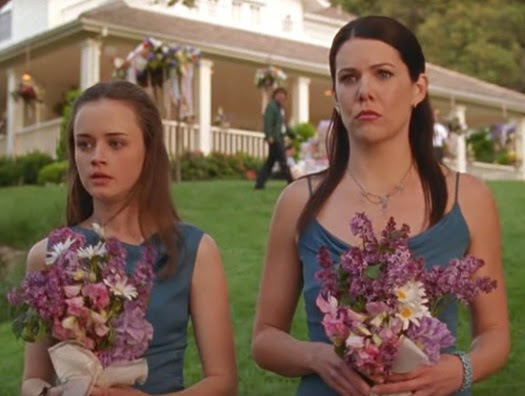 Part of the Gilmore Girls mythos is that the show’s creator Amy Sherman-Palladino has the last four words rattling around in her head.  Words that she would have written, had the studio kept her for the final series or asked her to write the final episode.

ASP: When the negotiations [for the final season] got so crazy we thought, Maybe we’re high? Maybe they don’t want it for the next couple of years. But by not having control of that, it shifts the focus of what my last words would have been. I was also holding on to it for a long time because I was thinking if we did do a movie, I would be able to use it there. I don’t think that’s ever going to happen so, I don’t know. Maybe I’ll eventually say the four words. I feel like now I’ll let people down because it’s been so built up. “Really? That’s what we waited all these twelve years for? Well, thanks so much.”

Quote from a terrific interview at Vulture.

Since that quote, we’ve had the Veronica Mars kickstarter and the subsequent outpouring of Gilmore love in response.  We’re also going through this weird Bunheads hiatus and I can’t see ASP twiddling her thumbs waiting for inspiration. Somewhere out there, I’m thinking ideas are knitting together. JK Rowling wrote the final chapter of the seventh Harry Potter book long before the first was even typed up. Gah, it’s such a tease! I can’t help thinking that if you know the destination, you’ve got some idea about the journey.

What do you think those final four words might be?  And who says them?  Get your thinking hats on and browse these last lines of Gilmores past for inspiration:

Lorelai: Luke will you marry me?
Luke: … What?

Rory: I hate you for ruining this for me!
[Rory runs out of the house and calls Dean’s mobile phone. His wife answers.]
Lindsay: Hello? Hello? Hello?

Series 2: Lorelai and Rory at Sookie and Jackson’s wedding.  Both have been knocked askew, Rory from kissing Jess and Lorelai from Christopher’s news that Sherry is pregnant and his immediate departure.

Series 3: Rory’s graduated from Chilton and they’re about to leave the building for the last time.

S03e22 Those Are Strings, Pinocchio