Lauren Graham appeared alongside her old bud Matthew Perry this week, in Go On. For the uninitiated, Go On is a sweet NBC comedy series nearing the end of its first season. It’s a bit of a hard sell, since the core of show revolves around Perry’s character, Ryan King, befriending a bunch of oddballs in his therapy group after the loss of his wife. Sounds like a downer but it’s quite the opposite and some of these people wouldn’t look out of place in Stars Hollow, or at least Woodbridge. 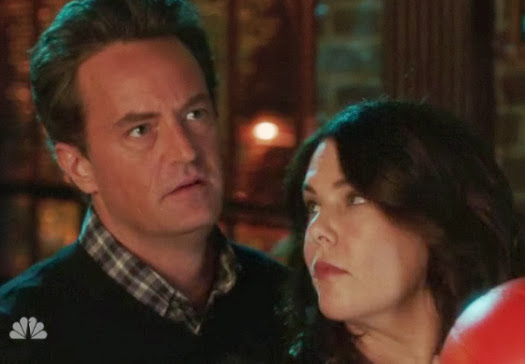 Lauren Graham guest-starred as Amy, one of Ryan’s old college friends and while he becomes confused about his (and their mutual friend Steven’s) feelings for her, it smartly and lovingly resolves itself and he maybe moves a step closer to moving on. If you haven’t seen Go On, give it a try, I think you might like it.