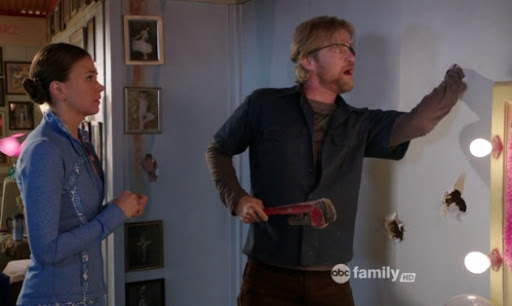 Michelle is covering the hectic schedule of dance classes and relieved that Fanny is due back tomorrow, until Boo tells her that Fanny has Facebooked – she won’t be back until next week.

The quartet are short of Sasha after their class – there’s been no sign of her since she stayed out all night and tore through her mum’s car roof, the same night her mum outed her dad. Ginny has big plans to celebrate her 8th anniversary with Josh that evening but Josh calls to say he’s helping build Ginny’s mum’s entertainment centre so instead her mum will be taking them to a sushi restaurant – even though Ginny doesn’t eat fish. She’s visibly bummed.

Michelle endures a tap dance class, helped by Sam into a chair at the end,only to be leaked on by a mysterious drip coming from the ceiling of the changing room.  She has a great bit with Fanny’s voicemail, then calls Truly, then calls a one-eyed plumber named Davis, who nobody in town trusts except to ‘keep an eye on things’.

With the changing room out of order, all the girls from the dance class get changed in Michelle’s place and start going through her stuff. Truly is keeping an eye on Davis while he works but there’s an open animosity between them. He has stopped the leak though, and leaves. Truly warns Michelle about mildew in the wet carpet and the quartet join Michelle blow drying the carpet. Charlie is still serving chauffeur duty punishment from his parents and comes by to pick her up. Boo still has a crush on him. With the floor eventually dry, Michelle treats the quartet to fried shapes at the Oyster Bar and learns that Miss Fanny has strict rules for everything including no high heels, direct sunlight or walking on sand.

Josh (Ginny’s only ever boyfriend) stops by, still impossibly nice and leaves to wait to drive Ginny home. Michelle can’t believe they’ve been together since the second grade and tells them about when she was sixteen, dating different boys on different nights, sometimes in shifts. Later that night, Michelle finds Truly and Davis making out in the changing room. Davis rushes out first, then Truly follows ashamedly in tears, right before the ceiling starts dripping again. Michelle sets up a bucket and falls asleep on the floor.

Truly: “I don’t hate Davis. I just hate his plumbing.”
Michelle: “Didn’t look like that from where I was standing.”

The morning after, it’s Saturday and Michelle returns to find a few of the girls, including Sasha, have been hanging out in her house, drinking her soda and discovering the jar of peanut butter by the bed. She sends them out. 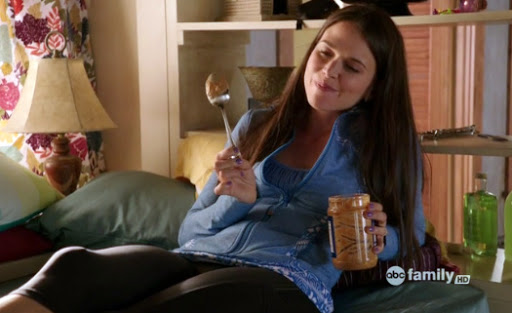 Melanie’s doing her homework in the Oyster Bar. Michelle’s stories have had an effect on Ginny and she gives Josh the cold shoulder, then they take the fight into the ladies’ room.

Michelle finds Truly gardening, to apologise about her lack of tact when she discovered her with Davis. Truly doesn’t want to talk about it but Michelle helps her realise that it’s time to let go of her love for Hubbell and get out there, grab a little something.

Michelle: “I once slept with a guy with peg leg. He was in Treasure Island, I thought it was a prop. It was not a prop.”

Michelle’s struggling with keys to get into the studio when Sasha walks by, wearing Michelle’s t-shirt (which she stole). Sasha lies to her face,  Michelle makes her give it back – Sasha doesn’t seem to care. Then she’s brazenly 15 minutes late for the ballet class and Michelle takes her aside, unleashing a lecture on respect. Sasha clearly has issues but Michelle doesn’t give her a chance to open up.

Michelle: “You made me wag my finger. I’m not a disciplinarian, I’m not a grown up. Well, I don’t wanna be. I’m not here to teach you anything. Except ballet, I am here to teach you ballet so you have two minutes to get your hair in a bun and get your butt back to the bar or don’t bother coming back to class. Period. [Michelle walks out] Made me say ‘period’, punk ass kid.”

Charlie and Melanie have their regular sibling spat when he comes to pick her up. Ginny’s mum Claire (the estate agent) is furious about Ginny breaking up with Josh and she blames Michelle, berates her in front of the class and their parents. Claire is a single mum and Josh had been helping round the house since Ginny’s dad walked out.

Nanette comforts a distraught Michelle with magic cookies and grape juice. Michelle doesn’t feel like she can be a friend to the girls at the same time as being their teacher and confesses that her relationship with her mother was not great.

Nanette: “Ever since the first night you came here something happened to Boo. She just walks a little taller. Certainly wasn’t because of me. You’re having a much bigger influence on these girls than you think.”
Michelle: “Forgot how good grape juice was.”

Charlie pulls Boo aside, asking her to talk him up to newly single Jenny because he thinks Jenny is hot (Melanie has already told us he likes boobs). Boo loyally tells Jenny, who’s flattered and although she knows Boo likes Charlie, Jenny can’t help thinking about Charlie and dating boys. 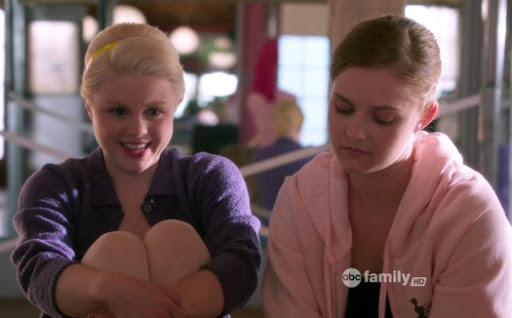 Poor Boo leaves, Nanette follows, giving Michelle the rest of the magic cookies and Michelle does her sad shuffle back into her house. Fade to black.

Sasha’s parents are split(ting) up, Ginny’s dad left, Boo’s dad seems to be out of the picture (unless he’s strangely absent like Mr. Kim). Are there any male role models here? Perhaps Josh counts – helping round the house like Dean used to changed out Lorelai’s water cooler or Jess clearing the gutters. I recall hearing that in Gilmore, Luke was originally written as a woman but changed to a man only because there weren’t any men. Do we care where the men are?

The top two comments for Mate of State’s ‘Desire’ on Youtube say that Bunheads brought them to the video. I had the same thing for ‘Picture in a Frame’, had to seek it out. Gilmore never did that for me with music, but it did with books – on Rory’s recommendation, I read and loved The Fountainhead. Have Gilmore Girls or Bunheads introduced you to anything new or am I just a weak-minded devotee? Any Prius-driving, Mallomar-munching, Sylvia Plath-readers out there?

Some noticeable social commentary in this episode, with the various references to social media and on girls playing the field. You could say these are related – with more and more of our private lives in other people’s control e.g. friends posting photos and rumours, some might be dissuaded from living the kind of life Michelle evidently did. Has social media made us less social? If so, for the better or worse?

An initially unrecogniseable Todd Lowe as Davis spars wonderfully with Truly. Like Gregg Henry (Rico/Mitchum Huntzberger in GG) before him, his character is wildly and refreshingly different from his character in Gilmore. I wonder which character he’s closer to in real life. Amy Sherman-Palladino can sure pick some great character actors. Rose Abdoo also present here, tapping to her own rhythm and one Jackson Douglas directing. Roll on Kirk…

All images from abc family