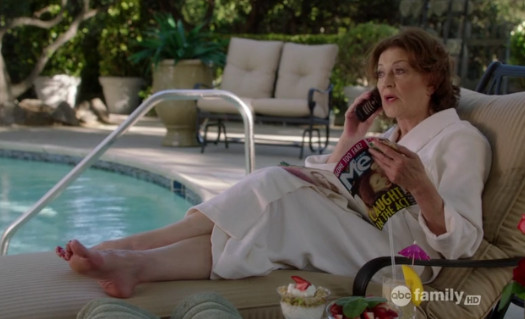 It’s another day in Paradise but the ballet class is waiting outside the studio because the doors are locked. Michelle goes searching for Fanny and finds Truly and the rest of Fanny’s book group discussing 50 Shades of Grey – without Fanny. Michelle tells Truly she needs to hang with people her own age and, learning that Fanny has gone vacationing for a week, calls her up. Unrepentant, Fanny persuades Michelle to teach the classes while she’s away, even though Michelle has birthday road trip plans. Oh, and Fanny has had a pole installed in the dance studio for a cardio-striptease class. With little choice, Michelle takes the morning’s ballet class.

The quartet of Boo, Ginny, Melanie and Sasha are in the Oyster Bar consuming unidentifiable fried food and co-ordinating a night out at the Movie Truck (a truck that shows movies inside it, hitting different towns on different nights). 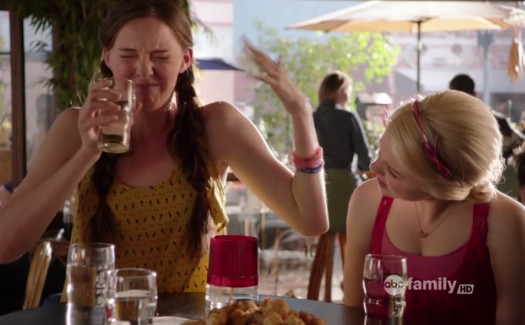 Michelle is becoming acquainted with the dancing pole when her friend Talia arrives to kick off the birthday celebrations, bringing with her Michelle’s last Vegas paycheck.

They cancel their road trip plans because of the week’s teaching and decide to blow the paycheck in Paradise instead. On their walking tour around town, Talia is drawn to Truly’s shop, Sparkles, where she wants to buy everything and Truly winds up being invited along to Michelle’s big birthday night out.

Truly: “For my last birthday Fanny took me to Colonial Williamsburg, I got a bonnet.”

That evening, Melanie, Ginny and Boo turn up at Sasha’s house and can hear her parents yelling at each other. Sasha lets them in and rushes them upstairs to get ready for their night out. Ginny’s impossibly thoughtful long-term boyfriend Josh drops by with personalised goody bags for each of the girls, but leaves shortly. Sasha’s parents’ argument is worse than normal but Sasha is determined for a night of escape.

Michelle and Talia give Truly a striking makeover and they too head out on the town.

In the Movie Truck, the quartet socially engineer four seats together in the crowded space although Boo ends up first somehow holding a stranger’s baby, then sitting next to Melanie’s brother Charlie, who she has a crush on.

With nothing else in Paradise, Michelle’s birthday trio also find themselves at the Movie Truck, but it’s sold out. Truly comes to the rescue, not only spying a back entrance to the truck, but whipping out a bottle of hooch to enjoy while they watch the self-explanatorily titled “Mountain of Arms” (rated R). 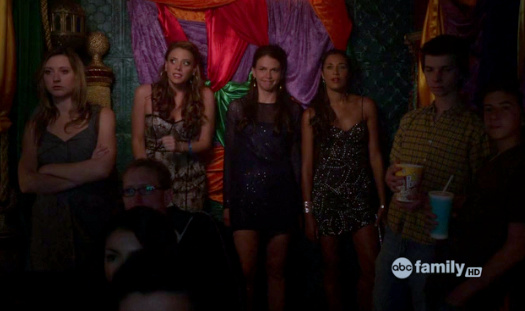 The movies is still rolling at 11.40pm when Sasha tells the girls they need to get back home before the house alarm sets at midnight, only she sees Michelle in the truck and, unsure of Michelle’s potential reaction to their under-age attendance, they decide to wait until the end of the movie so as  to not draw attention to themselves. They needn’t have worried, as they find Boo outside after the show, talking to a well-sozzled Michelle. Charlie writes another girl’s phone number on Boo’s hand and they run back to Sasha’s with only 5 minutes to go until midnight.

Unwilling to end the night so early, Truly discloses that she’s been spitting her drink back into the bottle (gross), so she can drive Michelle and Talia to a fabled Cupcake ATM.

Truly: “I’ve read about it. In Los Angeles there is a pink ATM and it dispenses all kinds of cupcakes, 24 hours a day [high-pitched squeal]”

The quartet arrive back at Sasha’s house, breathless but too late to enter the house without the alarm going off. Attempting to jump into a window from the roof of her mum’s BMW, Sasha falls and tears through the convertible roof. 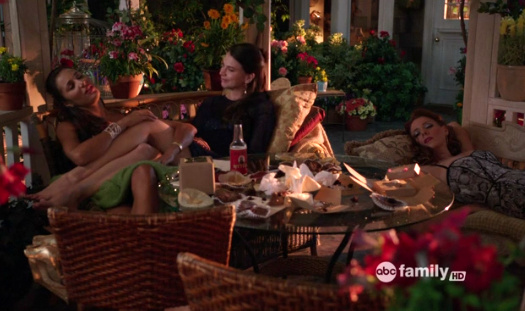 The sun is up and the quartet have slept in, and on, the broken car. Sasha tries to talk Boo out of Charlie, then confides that the invitation came from the Joffrey for the summer program and she intends to go, without telling her parents. With the house alarm automatically deactivated, they enter the house to find Sasha’s dad sitting on the sofa, staring into space. From previous asides, it appears his wife has outed him from the closet. The three girls head upstairs leaving Sasha to tell her dad that she stayed out all night and wrecked the car but he’s oblivious, heavy things on his mind.

Sasha and two dancers perform a nifty, slinky contemporary dance to They Might Be Giants’ ‘Istanbul not Constantinople’, that might be a dream sequence, might just be a thing. Either way, it’s entrancing. 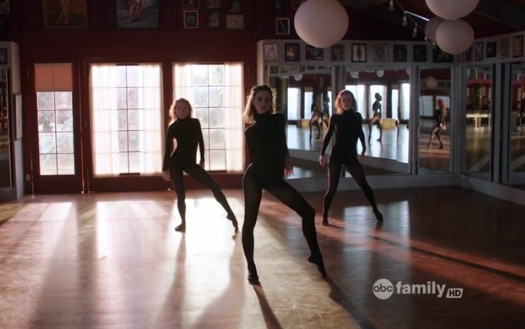 Nods to Gilmore in this episode: spitting in a can, ‘Istanbul not Constantinople’, persuading people to switch seats and Rose Abdoo loving the dirtiness of 50 Shades (come on, it was never meant to be high fiction).  A nod also to mcityrk for the well-coined collective ‘quartet’ for the four girls, which I’ve shamelessly stolen from comments on previous recaps.

I can’t believe there really is a cupcake ATM, it’s on Google and everything. I’ve just added it to my Schemer list (while checking off ‘Watch all seasons of Gilmore Girls’ – again). More pop culture in this episode than previous, I think – 50 Shades, Brangelina. Still a long way to go to match GG though.

Bunheads features some genius set design, most obviously in the dance studio with its Rubik’s Cube mirrors but no cameras in sight.  Other examples include the funfair, the lighting in the Movie Truck and the warmth of the gazebo (see pics above). It’s so cosy.

Is it just me or does Sasha sometimes look like Rory?

All images from abc family